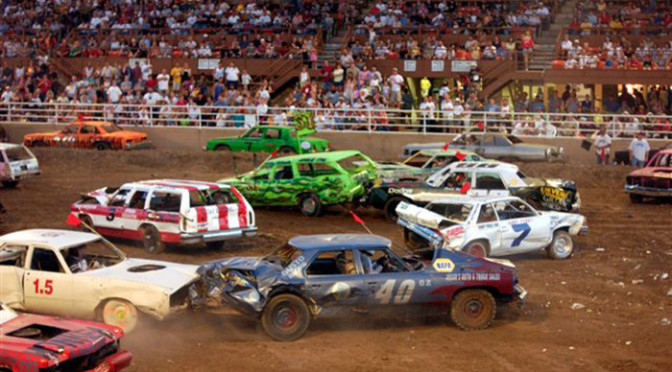 In the world of sports, the first Saturday in May is the biggest day for derby in the world.  Thousands of spectators from all walks of life descend to one place to watch top athletes with clever names race around an oval track, showcasing their athleticism, strategy, and speed.  The event takes place all day, but the only meaningful action takes place two minutes at a time.

No, it’s not that derby.

Today is the 137th running of the Kentucky Derby, the most famous horse race in the world. Twenty of some of the finest racing horses in the world will jam around the Churchill Downs race track in what is billed “The Most Exciting Two Minutes in Sports.”

If you think about it, there’s are quite a few similarities between roller derby and horse racing, particularly the Kentucky Derby. Top-level derby requires top athletes. (Yes, horses are athletes.) Action happens two minutes at a time, either in a derby jam or a derby horse race. Funny or clever names are a part of the culture of both sports. (Some of the entries this year: Mucho Macho Man, Pants on Fire, and Derby Kitten.) The participants a race on a flat oval track. (Granted, the track at Churchill Downs is quite a bit longer than the regulation WFTDA flat track.)

Okay, maybe comparing the two sports is a bit of a stretch. Still, the word “derby” isn’t in the exclusive domain of our beloved roller derby. It’s one that’s used regularly in the sports world. Here, I’ll highlight other “derbies” and attempt to compare them to roller derby.

In common: Good times had by all; an audience drinking a lot of beer
Uncommon: Steroids
This Derby’s Biggest Day: The MLB All-Star Game (mid-July)
Notable: Inspiring the event as it is known today, “Home Run Derby” was a syndicated television show in 1960, where baseball players competed one-on-one hitting home runs for cash prizes.

Not much needs to be said about the home run derby, an American sports classic. Simply, it’s a contest between top home-run hitters in Major League Baseball to see who can hit the most balls out of the park. This event is so popular with players and fans, some in the sports world argue that the derby is bigger than the all-star game that it precedes.

The home run derby brings out a lot of the culture and family aspect of the game. Many all-stars will watch from the field, with their kids in one arm and a video camera in the other, enjoying the moment. Players enjoy the moment and have a good time throughout, just like the skaters playing roller derby. Although professional baseball is serious business, it’s also what many ballplayers live for. There are lots of parallels between a baseball player’s passion for baseball, and a skater’s passion for roller derby.

In common: Sleek rolling bodies, do-it-yourself attitude, fun for the kiddies
Uncommon: Difficult to get back around to the starting line under your own power
This Derby’s Biggest Day: The All-American Soap Box Derby in Akron, Ohio (late July)
Notable: Soap box racing got its start in the 1930s, around the same time roller derby was invented.

Does anyone have a soapbox anymore?  Not that it matters.  What used to be a blast down a steep hill on a box with wheels is now an American tradition with the youth of America, even though the steep hill part is still in there.

Soap box derby in the modern age involves kids and parents working together to build a sleek and aerodynamic gravity-powered car.  These cars are then parked at the top of a hill, loaded with an adventurous child, and released to its own fate.  First one to the bottom wins.

Soap box racing is a parent-child bonding activity, and much like the numerous junior roller derby leagues sprouting up across the country, is designed to keep young people occupied in meaningful and learning activities.  I’m not sure what soap box racing would teach you, however—perhaps it’s the lesson on the importance of brakes.

In common: Speed, contact, boutfits, mandatory safety equipment
Uncommon: Cars, fires, total destruction
This Derby’s Biggest Day: Your local county fair
Notable: Every once in a while, a local race track will hold a demolition roller derby in an attempt to emulate roller derby, with but with cars and more crashing.

It is said that the first automobile race was held after the second car was made.  The first demolition derby, on the other hand, probably happened sometime in the 1950s.  I’m sure it was discovered by accident.

Demolition derby is strictly a local affair, with short tracks and dirt tracks holding events to appease the throngs of county patrons who just want to see violence and destruction. Participants take the time to pretty up their cars for the show, despite knowing there won’t be much of their car left afterwards.

While it may seem like a pretty mindless thing,  there’s a strategy game involved with crashing cars into each other.  Most drivers prefer to back in to other cars, in order to protect their fragile radiators at the front.  Once they go, so goes the car. Car positioning and being aware of other drivers around is a lot like how blockers in a roller derby pack need to keep their wits about them.  Derby skaters won’t spontaneously burst into flames if hit in the wrong place, thankfully.

Common: Any local rivalry would qualify; for example, Rocky Mountain vs. Denver
Uncommon: Death threats, violence, arrests
This Derby’s Biggest Day: El Clásico (at least twice a year in Spain)
Notable: If this were any other country, we would be referring to Rocky/Denver games a “derby derby.” (If Louisville, KY gets another roller derby team, we may start referring to their games as a Derby City Derby derby.  Wrap your head around that one.)

In sports, a derby (or local derby) is simply any game between two teams that are in very close proximity to each other geographically.  This happens in American sports several times during the year, particularly in places like Los Angeles and New York that have multiple teams within the same league.  However, we don’t refer to them as “derbies,” but rather a catchy name like the Subway Series or the Freeway Face-Off.

If you skip across the pond, though, when someone mentions a derby, they’re thinking more along the lines of a fierce rivalry between local sports teams, particularly soccer teams. Football clubs in Europe are practically on top of each other, so derby games are very common events looked forward to throughout communities. They’re kind of a big deal.

If you think you’re passionate about roller derby, you haven’t got nothin’ on soccer fans. Take for example, the world’s most-watched sporting rivalry. Barcelona and Real Madrid are two of Spain’s best and most famous soccer teams. But the rivalry between them is so passionate and so fierce, the world takes notice: Over 500 million people worldwide watched the two teams meet in a critical 2002 match, in what soccer critics dubbed “The Match of the Century.”

Unfortunately, soccer fans can sometimes get a little too passionate.  Not a year goes by with reports of hooliganism—the act of acting or being violent in support for or in love with the sports team you support.  Although rare, a derby can cause certain fans to go overboard with support, attacking supporters on the other team for no other reason that they are wearing the wrong jersey.  In fact, this recently happened at a baseball game here in Los Angeles, where a San Francisco Giants fan was nearly killed by raucous Dodger fans.  No one comes out a winner in situations like that, and we can only hope someday crap like that is weeded out from sports for good.

In common: Stylish, nice curves
Uncommon: Poor head protection
This Derby’s Biggest Day: Being purchased at the local haberdashery
Notable: More commonly known as the bowler hat, this piece of headgear has been out of style for several decades.  A shame, really.

Roller derby has some serious style.  So does the derby hat.  Coincidence?  Roller derby is starting to make a serious comeback.  Surely, the derby hat won’t be far behind.  You heard it here first.