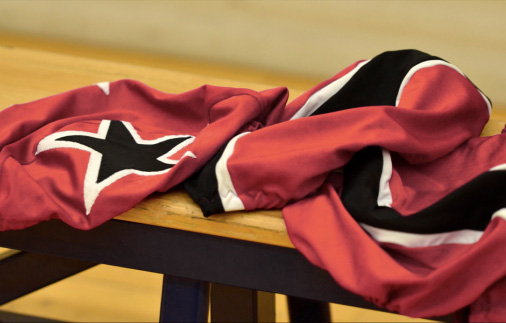 The name of the game in WFTDA roller derby is for a team to get their jammer out of the pack first (and legally) to earn the all-important lead jammer status, and with it the chance to get first crack at scoring points and the privilege to end the jam at any time.

However, only one team is able to get lead status during a jam. It’s inevitable that there will be many, many times when that team is not going to be yours.

As WFTDA play has become slower, walls tougher, and the rear blocker advantage made even greater, it’s downright shocking to me that the most powerful option available  to not-lead-jammer teams within the rules is rarely used in its most efficient and beneficial form.

Passing the star is an odd implementation of the active pivot rule that roller derby has traditionally had for decades. Despite this, the WFTDA form1 of the “active” pivot is functional enough to help get a team’s jammer—or rather, one of the team’s jammers—out on a scoring pass behind the lead jammer faster and easier than they could without it.

There could be a reason for it being a relatively rare sight in derby. Once a jammer removes her helmet cover to attempt a star pass to the pivot, her team becomes ineligible to earn lead status for the jam. Then again, if the other team has already picked up lead status, this becomes irrelevant.

Such is the perfect environment in which passing the star can be used to great effect.

For the most part, a jammer that gets out first is going to do so with a lot of help from the pack definition rules, the no-pack situation, and the 20-foot call that forces strung out blockers to disengage. (Not so much with help from her teammates, unfortunately.) It’s just as likely that the jammer still stuck in the pack will be at the rear, behind a big ol’ wall of opposing blockers.

The team trapped at the front can take advantage of the fact that that a rear wall will generally have most of their attention on the jammer behind them and create an opportunity to break out of the pack. Namely, the pivot can to sneak up in front of the defense near the jammer and take a star pass through the wall, leaving the opposing blockers caught with their pants down.

Attempting a star pass under these circumstances has benefits. It’s easier to try to get a panty-grasping hand over shoulders, through a small gap, or around the edge of a defensive wall than it is to cram a whole jammer through it. If successful, such a maneuver will reduce or eliminate the risk of jammer cutting penalties; executed correctly, the jammer will instantly appear on the other side of any opposing blockers once the pivot receives the star. You can’t cut blockers that are already behind you!

Unless a team is already on the verge of (or otherwise confident) it can naturally get their jammer out of the pack to chase, breaking out the pivot-turned-jammer instead is only a good thing. For one, it ensures the opponent lead jammer won’t get more than one or two unopposed scoring passes, preventing overly lopsided regular jams from breaking a game open. Depending on how fast the transfer takes place, there’s a chance of stealing points in a situation that might look bleak at first blush.

Done with enough frequency, passing the star can help keep more games within reach that might not normally be. As many as seven or eight one-pass jams can be wiped out by one timely power jam going the other way. Pulling off a lot of quick star passes can limit the total damage done during regular jams over the course of sixty minutes. This could eventually create pressure on a team that can’t seem to pull away, potentially causing them to make more mistakes and give up the inevitable penalties and power jams that come as a result of them.

If a team has enough success, it will force the victimized team to change their defensive tactics to account for it. (If they don’t, then a team can continue to pass the star to be second jammer out of the pack without hassle.) But even this adjustment can be used to a star-passing team’s advantage.

Trying to defensively adjust for frequent star passes will require a team to account for two players on the track at some point during the initial pass. By dividing resources between the jammer and the pivot, even for a moment, at some point a lane will open up for the trapped jammer.

The team looking to respond to the lead jammer can take advantage of this lane to get their jammer out of pack the old-fashioned way. With at least one of the defenders needing to split their attention, the rest of the team can swoop in, seal off an edge or punch open a hole, and help their jammer to break out—no panty pass required.

Even if star passes aren’t always a success, it’s still worth it to attempt them with great frequency. It’s a safe bet that the opposition will accelerate in an attempt to thwart the jammer and/or pivot from completing the star pass or breaking out. The resulting movement will create a faster pack—or at least, a pack that gets moving again—which will give the not-lead-jammer team more time to break out one of their position players before the lead jammer gets into scoring position.

So with enough successful attempts, a team that’s in a tough spot after losing the battle for lead jammer can make their lives that much less difficult for the rest of the jam.

It makes sense to try to keep passing the star, and it just so happens that WFTDA rules make it very easy for teams to try and so do. In fact, there are few reasons to not want to attempt to do it on every jam where circumstances are favorable.

Remember, once the other team’s jammer gains lead status, losing the ability to gain it on account of your jammer removing her helmet cover is a moot point. The other negative of holding an empty jammer star, the inability to score points (rule 3.5.4.1), is also moot seeing as your jammer is still on the initial pass where no points can be scored.

Therefore, after the two whistles blast in favor of the opponents, the smartest thing a jammer stuck deep in a pack can do is to immediately remove her helmet cover and carry it in her hand. In this situation, there is no penalty or other detriment to indefinitely keeping the jammer helmet cover off one’s head during the initial pass. (Sure, there’s a risk of dropping it. Then again, wrist guards have Velcro.) But there is a benefit to having it in one’s hand, at the ready to quickly pass it off to the pivot, should the opportunity present itself.

To give the best chance for an opportunity to present itself, the rest of the team should be trained to set up possible second-out-of-the-pack plays at the lead jammer signal. The pivot should make a beeline to the space in front of her jammer, particularly if the jammer is behind a wall. After that, the pivot should track her jammer and stay within arm’s reach at all times, awaiting a potential hand-off at any moment. At the same time, blockers should look for an opportunity to make a clearing block for their jammer (or their pivot, after a hand-off) should the opposition split to cover the pivot or overreact to a dummy hand-off.

Whether the jammer passes the star or manages to break out of the pack herself, it’s a simple matter for the then-current jammer to replace the helmet cover before emerging from the forward engagement zone to restore jammer abilities and avoid out-of-play penalties.

Integrating the potential for quick star passes into an offense only gives a team more options to defeat their opponent’s scoring pass strategies, and presents opportunities that may not have been previously available.

Is that rear 4-wall too busy ignoring your blockers? Stick your arm over it to your pivot to teach them a lesson and help loosen up that wall going forward, creating better chances to get lead jammer in subsequent jams.

Straddling the boundary and trying to maintain your balance after passing on inside? Your pivot should be nearby, so hand the panty to her before you step over the line and are forced to recycle back. Pretty soon, that half-inside-lane dive bomb may become worth taking with more frequency.

Can’t seem to get the pegassist down? Speed up and leap around the rear wall, handing off the panty (but don’t throw it, that’s illegal) to your awaiting pivot on the other side before you touch down in the outfield. Make that slow, lazy defense pay for their awful, awful sins.

If you really want to get crazy with things, a jammer can whip her pivot forward and simultaneously transfer the helmet cover with the whipping hand. If done smoothly enough, it could confuse the defense as to which player actually has the star in their possession. Which player do you block if you don’t immediately know which is the jammer?

Ultimately, the core idea behind passing the star in this or any situation is the same as the historical role and purpose of the pivot: To force a team to divide their attention or resources between more opponents on the track, thereby creating better offense opportunities against a defense incapable of properly defending such a situation.

A 4-on-1 situation is a pretty bad one to be in, especially when the “1” is your jammer trapped at the rear of the pack. But by making an opposing team start thinking about potential 4-on-2 situations, with “1” behind them (the jammer, with the star in her hand) and “1” ahead of them (the pivot, waiting to receive the star), the odds can even out a bit by at least provoking the rear wall to move the pack forward more than they would normally want to.

In a more complete roller derby rule set, a full-on active pivot evens the odds even more, for both teams. But even in the still-evolving, often-frustrating WFTDA rules environment, there are still opportunities available to force an uncooperative team to act against their will. But it can only happen by squeezing every last tactical option out of the rules—if teams are good enough, and brave enough, to try doing so.