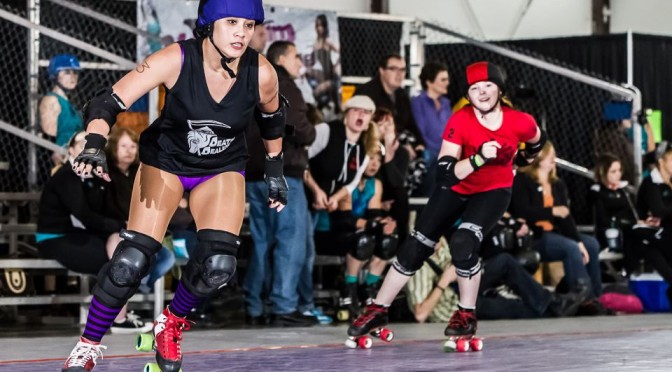 The three roller derby rule sets that use the active pivot—a pivot that is eligible to break and score only once the opposing jammer has become lead—results in quick-hitting play.

This addition—better said, restoration—to MADE, OSDA, and USARS rules changes how teams must approach strategy on a jam-by-jam and game-long basis. The tactics that teams have at their disposal on offense with an active pivot, and the corresponding considerations they must deal with on defense, makes these versions of roller derby very dynamic.

It also tends to make them quite fast. Teams need to press forward to protect or envelop the pivots at the front of the pack, as well as cover the incoming jammer at the rear. Because such a defense naturally spreads a team out, it must speed up to help keep opposing blockers behind them more easily.

Of course, players will have to slow down at some point to get their jammer out, blocking opponents to score. Still, the quicker an individual player or team is, the more strategy options they would have available to them when playing in a faster game. They would be capable of doing things at speed that a lesser-skilled team could.

However, this doesn’t automatically mean that the faster team will always win in the active pivot game. Speed is only one component of the roller derby equation. A good team should also be proficient at using their brains to come up with counter-tactics against a fast team, then using their brawn to execute those tactics better than their opponents.

Which is why when I see a team with lead jammer do this, especially when it happens over and over, I have to wonder where their brains are:

Once an inexperienced, slow, or otherwise outmatched jammer breaks from the pack to pick up lead status, a pivot with a speed and positional advantage will activate and chase. If the speed differential between these two players is significant, it will almost always result in an instant jam call-off.

Jammers that find themselves in this situation are entering a speed race that they are certain to lose. Teams that do this frequently—as seen above—may appear to have no chance to score points on most jams, as it looks to be impossible to stop a fast pivot consistently laying claim to or otherwise sandbagging at the front of the pack.

But even if a team isn’t fast enough, they can still be smart enough and good enough to score in an apparently disadvantageous situation.

The way to go about turning the tables sounds counter-intuitive: Have the jammer not go out on a scoring pass. At least, not immediately.

In a slower jammer/faster pivot breakout scenario, the jammer will actually have a much better chance of scoring if they delay their exit out of pack for a moment or two. This can give their blockers a chance to recover forward defensive position and seal off the opposing pivot, thereby preventing the pivot from immediately giving chase once the jammer decides to make a break for it.

The idea behind this strategy play is that a slower team can compensate for their lack of track speed with superior blocking and teamwork. If the other team’s speed is contained by better blocking, any speed advantage their pivot (or blockers or jammer) may have is less of a factor. After all, a fast skater can’t go fast if they can’t get around a slower blocker!

How to go about delaying a jammer breakout depends on the rule set involved.

In USARS rules, lead status is not awarded until the jammer clears 10-foot pack proximity. This means a pivot cannot activate and break until the jammer is that distance away from them. This buffer zone can be used to the jammer’s advantage to create a stronger offensive opportunity and reduce the risk of losing lead status on an early re-pass.

After an almost-lead jammer passes the opposing pivot at the front, they’ll want to temporarily switch to defense and block the pivot back into the pack—also known as eating the baby—to corral them into their blocker teammates. Once the pivot threat is secured, the jammer is then free break out of the pack, pick up lead status, and go on a scoring pass unopposed.

In MADE and OSDA rules, lead jammer is immediately given to the first jammer that completes their initial pass legally and clears the foremost in-play blocker. If that foremost blocker is the opposing pivot, the breakout pass will activate the pivot’s scoring abilities and make them free to chase immediately.

Eating the baby in this situation is quite a bit more dangerous, but still possible, seeing as a missed block or a good juke by the target pivot could result in a pass and a quick loss of lead status.

The better play for a jammer playing in this style of game is to delay their breakout by staying behind the pivot altogether. The idea is the same: Wait for blocker support coming forward to prevent an easy pivot breakout. Although in this case, it might be better to get assistance from the friendly pivot rather than their blockers. If the pivot is doing their job correctly, they should already be at the front of the pack.

In this video from a MADE-rules game, the blue jammer hits the brakes before passing the black pivot (0:17) and directs his teammates forward. This delay allows the blue team time to crowd the front of the pack, making it harder for the black pivot to stay in position, a position he soon loses. With a nice clearing block by a forward-pressing blue blocker to seal the deal, the blue jammer gets the unanswered breakout he called in his teammates for.

A play like this shows just how important it is for a team’s rear defense to have the opposing jammer secured. If the rest of the team can’t keep the opposing jammer tied up long enough, delaying a jammer break at the front would only make it easier for the other jammer to get out for lead instead.

It’s also vital for teammates to be positioned in front of opposing blockers within the pack, ready to give the jammer timely assistance when it may be required. This kind of forward positioning can only be earned by staying on blocks all the way through the initial pass. This prevents a team from using their speed to spoil an offensive push, such as letting them recover from slipped blocks or to reform into a wall and trap players.

In the active game, a team with a strong presence at the front of the pack can take a lot of pressure off of their jammer. Being able to recycle a threatening pivot via a delayed break on the initial pass is useful, but even if this attempt is unsuccessful, a jammer getting involved in a race to the rear of the pack that they might lose isn’t necessarily the end of the world, nor should it always signal the end of the jam.

It can often be worth the risk to drag the opposing pivot/ jammer into the pack on a scoring pass if a lights-out power blocker is waiting for them on defense. A player must be in-bounds and on their skates to successfully call off a jam in these rule sets, so even if the slower jammer gets passed on the loop around to the back of the pack, his or her teammates can pick up the slack by driving the the enemy scorer out of bounds or into the ground before they do any damage.

If executed properly, the worst that could happen is a 0-0 defensive call off by the other team during the scoring pass at the rear of the pack. But if done right, the slower jammer can retake lead position and win back the scoring chance.

In USARS rules, a team has an additional option to compensate for a slower jammer. By advancing all team blockers to the front of the pack, they become the pack and can block at whatever speed they so choose. If that team’s jammer loses lead en route to the pack, it’s not as bad as it may first seem if their teammates are taking care of business; the new lead scorer is actually less likely to score on the play due to the threat of the rear blockers becoming out of play.

Delayed breakouts and pack dominance can be used together to wring points out of the most unlikely of situations.

A strong, fast pivot will want to recognize when a slower jammer might be prone to stop the jam quickly when threatened. If this conservative jammer picks up lead status, the pivot should adjust and delay a chasing breakout when possible to deliberately allow the jammer to build up a gap. This delay can be for a few moments or for a few seconds, which is something the pivot will need to decide based on speed differential and blocking abilities in the pack.

A pivot not immediately giving chase will give the lead jammer the false impression that they have more time to score than they actually do. The faster pivot can then spring into action with such timing that they catch the jammer just as they enter the pack. This generates a scoring chance that would never have materialized if the pivot had instead chased the jammer immediately after they completed their initial pass.

Delayed jammer breaks, forward pack advantage, and delayed pivot breaks can all wring additional points out of the opposing team that they might not have allowed otherwise. Even though there will inevitably be jams where these plays backfire, a better team will generally win more points that they give up in these situations over the course of a game or a season.

Never forget that the primary objective of a team—not just the jammers, but the pivots and blockers, too—is to get into position to score as many points as possible on every jam, whether they have attained lead jammer status or not. If going as fast as possible is only ever going to result in a quick 0-0 jam, then both teams have failed in their objective.

By having jammers playing defense during the initial pass, teams being bold and aggressive in the pack before scoring passes, and putting trust into blockers and pivots to make plays when points are on the line, a team can use the things they’re good at to make up for the ones they might not be so good at.

If a slower team performs to the best of their abilities in all other aspects of play, they can compete with speed skaters of the derby world. This just goes to show that even in a game that’s designed to be fast, such as those played under MADE, OSDA, and USARS rules, using outright speed isn’t always the outright advantage it appears to be.