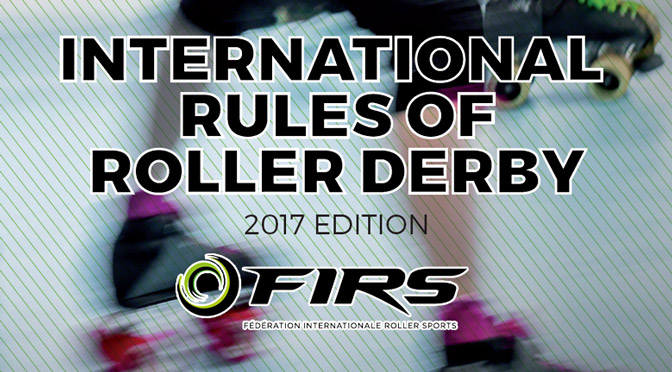 The Fédération Internationale de Roller Sports (FIRS), recognized by the International Olympic Committee as the official international governing body for all things roller sports, has released the first version of its rules of roller derby. They officially go into effect on January 1, 2017.

The move comes ahead of the ramp-up to the organization’s first combined world championships, the World Roller Games, taking place this September in Nanjing, China. Along with those of inline speed, rink hockey, artistic skating, and many other skating disciplines, the Roller Games will feature the first recognized world championship of roller derby—played under FIRS roller derby rules.

“The first edition of the International Rules of Roller Derby will be used in all official competitions under the Olympic Movement, including the rules for the 2017 World Roller Games and future events in which the sport gets accepted as a discipline,” said FIRS in a press release.

This means that FIRS roller derby, like USARS roller derby, will feature fast gameplay in the derby-only direction, pivot breaks that encourage tight competition during all scoring passes, dynamic lead jammer status, and other rules that help ensure that simultaneous offensive and defensive engagement happens during all moments of a jam.

The new rules come despite the sport already having an established international rule set (and governing body), that of the WFTDA. However, FIRS has specific intentions with its version of the game, going places the WFTDA is currently not willing or able to go.

As things stand now, any and all international roller derby competitions within the Olympic Movement must be sanctioned by FIRS, since FIRS is the only governing body currently recognized by the IOC to organize these competitions. The Roller Games are one such event, as are various Continental and World Games.

With FIRS being an international governing body, it is only focusing on international competitions not currently featuring roller derby. After the fallout of the WFTDA “slow derby” era, which drove away many fans,1Some might argue that the “slow derby” era is still ongoing. FIRS feels that its different rule set may be just what the sport needs to reach out to new audiences through these high-exposure competitions.

“We acknowledge that most teams at this moment play under different rules, but we have observed first hand that the small differences between rulesets represent an easy transition for officials and athletes,” the press release continues. “We firmly believe that the new International Rules promote a safe and dynamic version of the sport that will help grow the visibility of roller derby to a broad range of audiences worldwide.”

After the rules were published, Regueiro took to Facebook to comment on the position of FIRS and address some of the community’s concerns.

“For the rules, it has never been a secret that FIRS accepted to adopt the USARS rules with modifications to apply to the world instead of just the USA,” he said in a Facebook comment. “This was after WFTDA rejected the fact that FIRS is the officially recognized IGB.”

(The WFTDA met with FIRS in early 2015 to discuss their respective positions on roller derby governance. There was much disagreement on both sides, leading to the WFTDA to seek IOC recognition on its own. For the complete details on this meeting, read our exclusive report, here.)

“This is also after both rules were shown side by side to the leadership of FIRS and to the Organizing Committee of the Roller Games, who all decided to adopt the style where players would continuously move forward and skate fast.

“You know which one that is.”

Regueiro also alluded to the fears that FIRS would require national skating federations to adopt their roller derby rules over those of the WFTDA.

“We will NOT impose the International Rules for national competition,” he said. “All the teams playing the WFTDA rules and seeking ranking with them, and who at the same time are members of their Federation will not be forced by FIRS to play under any specific rules.”

He concluded, “this will allow all derby organizations to continue their growth, which is in my opinion what we all should want.”

This hands-off approach on the national level dovetails with the FIRS derby rule book itself. The very first page says that “National Federations have discretion to decide the date of implementation at national level.” Existing countries with ties to FIRS and that have established roller derby programs under the WFTDA banner are free to adopt FIRS rules any time or create national teams to enter in competitions that use them, but nothing compels them to do so.

Basically, FIRS will only be enforcing use of its rules at the international competitions it sanctions. However, this is still something of a problem for FIRS, given that it currently has next to no teams or officials experienced in their usage. That’s an even bigger problem now that the Roller Games are only nine months away.

FIRS thinks that’s still enough time to get new countries up to speed. Along with the rules publications (available here) FIRS will be organizing rules clinics in “several locations” around the world this year. Online seminars and tests are also in the works, to help interested parties get familiar with the FIRS way of roller derby “at their own pace.”

Whether this plan will be enough for FIRS to assemble a credible turnout of men’s and women’s roller derby teams in China this September for the World Roller Games is still not clear, but at least we now have some idea of just what that plan looks like.

More pertinent for us, we now know what FIRS rules look like. As we do with every ruleset of significance, Roller Derby Notes will put FIRS roller derby rules under the microscope with a full analysis. Look for that next month, and stay with us all year as we keep a critical eye on the FIRS roller derby program.