This past weekend, 10 women’s roller derby teams hit the beach to play at Battle for the Coast, a two-day flat track tournament in Ventura, Calif. The winners were–get this–the L.A. Derby Dolls, defeating a surprising Ventura County Derby Darlins host team by a score of 134-83. San Diego Derby Dolls were 3rd, over the Sac City Rollers.

Day two of the event featured a full-length men’s exhibition game between a pair of mash-up all-star teams from the Pacific Northwest and the Southwest. The Northwest won in a thriller, 150-148.

There was no live streaming of this event, so no one outside of the tournament got to see these great games live. Happily, I brought my camera and decided to at least get something on film. The plan was to film both the men’s game and the ladies’ final so everyone could see the great action.

Well, one out of two ain’t bad. 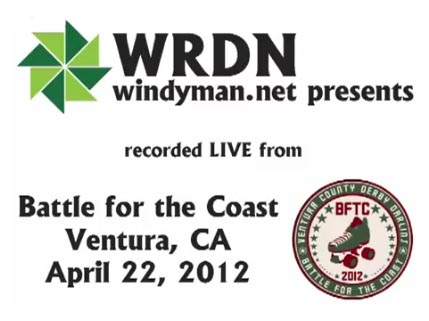 Unfortunately, my camera’s single battery only got through the men’s game, leaving me unable to record the thrilling L.A.-Ventura final. (Bummer.) But if I had to pick one to get, it’d be the men’s all-star mash-up. There isn’t enough men’s derby out there to see, so I’m glad I was able to at least grab it for everyone.

The game featured men’s players such as Speed Dealer, Ryrod, Radillac, Adam Collider, Billy Motion, Collin Ambulance, Rave N’ BustHer, and Pitchit. It was fast (except for That One Jam), hard-hitting, and the crowd seemed to like it quite a bit.

I’d love to bring everyone more derby video, so consider this first game a test run. I hope to improve upon things in the future, but for now we’ll start things off with a good, fast (except for That One Jam) game of men’s derby and take it from there.