[UPDATE – 3/22/16] Roller Games 2017 will not be held in Spain as originally announced, but instead in Nanjing, China. Barcelona will instead host in 2019. For more on this news update, click here.

The International Roller Skating Federation (FIRS) has announced that Barcelona, Spain will host Roller Games, the first combined FIRS world championships, in 2017. Among the events on the Roller Games program is roller derby. 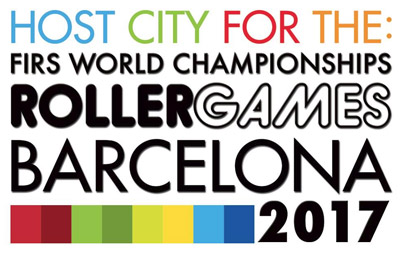 FIRS President Sabatino Aracu revealed Barcelona as the winning city at the bi-annual FIRS Congress, held this past weekend in Rome, Italy. Barcelona was selected over Lima, Peru for the right to host the competition.

“The World Roller Games will be a spectacular event gathering for the first time in one city the world championships of ten roller disciplines: artistic, speed, rink hockey, inline hockey, roller freestyle, skateboarding, inline freestyle, inline downhill1, roller derby, and inline alpine,” Aracu said. “Choosing Barcelona confirms the great appeal that both this city and roller sports have on young people. I am sure it will be a great opportunity for both.”

The Roller Games, a two-week long Olympic/X-Games inspired event, are being positioned as a centerpiece that can demonstrate how roller sports and its varied disciplines makes for exciting competition, generates interest, and fosters long-term participation from young athletes. These together, FIRS believes, is the key to ensuring consistent and stable growth in roller sports worldwide.

The timing could not be better for FIRS. As we previously reported, roller sports (and maybe roller derby) could be included in the 2024 Olympic program under new reforms passed by the International Olympic Committee. But it turns out that those same reforms are giving FIRS a chance to have roller sports added to the 2020 Tokyo Games, provided its bid is accepted by Japanese organizers over other potential events like baseball/softball, karate, or surfing.

FIRS is confident that it could make it in as soon as 2020, having staged a successful showing of roller sports during the Youth Olympic Games in China last year. It went so well, Chinese authorities immediately agreed to bid for future FIRS world championships in 2016 and 2018, and Roller Games in 2019. Along with the inaugural 2017 event, FIRS hopes the roll it has been on lately will lend to its case for eventual Olympic inclusion.

But we’re getting ahead of ourselves a bit. First things first, FIRS needs to decide what kind of roller derby it will put into competition for Roller Games and any future annual roller derby world championships.

A decision on this will need to be made soon. The 100-plus national roller sports federations that are members of FIRS, should they decide to field a roller derby team, will need time to install a national structure for derby, if it doesn’t already exist; select (or partner with existing) men’s and women’s national teams; build up a base of certified coaches and officials; and allocate funds to support training and travel, among other things.

Plus, we haven’t even got to the most obvious question about roller derby at Roller Games: What rules will participants play by? There is no clear answer to this question yet2, but it is certain that there will be one forthcoming in the near future. FIRS has had an international roller derby technical committee, CIRD, for a few years now, and pretty soon we’re going to see what kind of derby the organization believes will best promote roller skating to the world.

During the FIRS Congress, the host candidate cities gave their pitches in front of representatives from over 60 countries. These proposals included arenas with seating in the thousands to host the roller derby competition (and every other event).3 Local dignitaries seemed convinced that there would be enough excitement in town to fill them.

For existing FIRS roller sports disciplines, particularly speed, hockey, and figure, things will be moving fast between now and 2017 to prepare for a potential world audience, the likes of which it has never seen before. For FIRS Roller Derby, things will need to happen even faster if it wants to come along for the ride.

RollerDerbyNotes.com will keep a look out for any new developments on roller derby at Roller Games and report on any updates.