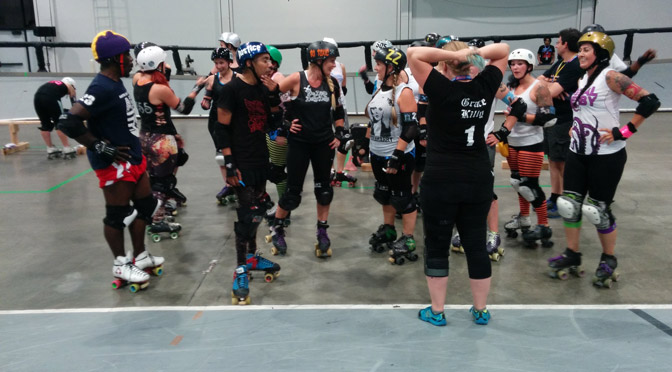 A lot of crazy things happened at RollerCon this year. The Superhero party. The Black ‘n Blue Ball. The hot tub at 4:00 in the morning. How the stars aligned to bring a genuine roller derby banked track to RollerCon for the first time—and maybe, the only time.

As if having a banked track wasn’t crazy enough, some of the powers that be had an even crazier idea: Play the flat track game on the high banks.

For one night only, the WFTDA became the WBTDA, as a co-ed cadre of skaters had an informal WFTDA-rules black-and-white scrimmage on the banked track. Wild!

Though not as wild as it could have been. Originally scheduled to be a complete and full-length game with an RSVP-only roster, circumstances turned it into a half-hour get-together with no actual referees or NSOs, no score kept, and shorter rosters than anticipated. This downgraded the game from a major event to a novelty sideshow at RollerCon.

Despite this, the show turned out to be a pretty gosh-darn fun one.

With no referees in the infield, the WFTDA’s Grace Killy acted as every jam ref and pack ref put together. Originally there just to enjoy themselves, banked track officials from the RDCL quickly sprung into action and acted as a “referee by committee,” boisterously yelling out any penalties they saw from their perch above turn 1.

The skaters on the track—which included Quadzilla, Justice Feelgood Marshall, newly-appointed WFTDA Vice President Amy Spears; and RollerCon Kingpin Ivanna S. Pankin, who came up with this kooky plan in the first place—were having the most fun. Everyone playing had the biggest, goofiest grins on their faces, even as they were mired in scrums, spinning out into the infield, or falling to the track after a big hit.

The experience of the track itself was part of this, coming from the amplification factor of the bank. In a world where fast becomes faster, high becomes higher, and apexes become apexier, cool shit is going to happen no matter what kind of game is being played.

The highlights included Quadzilla being better than everyone else, a reverse apex jump, a double apex jump by the same jammer in the same turn (!!!), and a few plays on the rail that simply couldn’t take place on the flat track. A lot of it was pretty neat!

On the other hand, some of it wasn’t!

Some in the banked track community were concerned about what might happen when WFTDA rules, designed for the open spaces of a flat track, were applied in a tighter, faster, more dimensional arena. Though nothing significantly negative came to pass (thank goodness) there were still quite a few dodgy moments during the game.

Most of the trouble came during jammer runbacks. Inevitably, one of them resulted in an undesirable friendly-fire collision, as you can see in the video. (They were both fine.)

There was also a scrum on the backstretch that ejected a blocker under the rail and out of the track. (She was fine.) Naturally, this is an occupational hazard on the elevated platform that is a banked track, regardless of the rule set being employed.

However, you only see it in the RDCL about once every 500 jams, at most; the WFTDA barely got past 20. Sketchy!

In any event, it was definitely a surreal experience. Speaking personally, from the perspective of a regular attendee to banked track games in Los Angeles and as a former banked skater, a lot of the flat track stuff happening on the banked track was very weird to see. I might even go as far to say that some of it was completely unnecessary.

But given the low-key atmosphere at RollerCon and the pioneering spirit of the participants, it was still good fun to watch roller derby happening in a new-but-not-new way. For a special one-time experimental scrimmage played just to see if it could be done, it was just right.

If you’re wondering what the experiment looked like, you’re in luck! We’ve captured the whole game and uploaded it for all to see. What do you think about WFTDA flat track derby on the banked track?

Editor’s Note: The video is a bit wobbly. Apologies for that, but the mount on my handheld tripod was broken. Stability was added back in in post-processing. It was the best I could do.

Further apologies for the audible heckling. There were hecklers not far from the camera…one of which may have been operating the camera itself.

For the extra-curious, here’s an RDCL-rules banked track game worth watching if you want to make a one-to-one banked-to-banked comparison. It’s from Battle on the Bank VIII, the RDCL national tournament, held this past summer in Seattle.