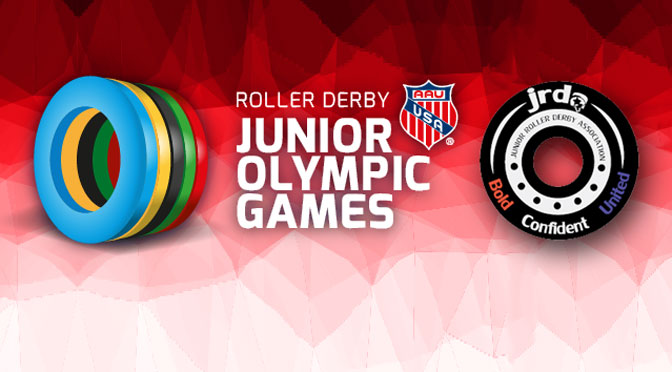 Roller derby is still years away from a serious bid for inclusion in the Olympic Games. But the JRDA and USARS are teaming up to take a major move toward it.

In a recently-announced collaboration, the Junior Roller Derby Association will join USA Roller Sports in bringing high-level junior derby to the AAU Junior Olympic Games this year. The competition is planned to feature a selection of elite regional and international teams, and will take place in conjunction with the JRDA Championships and USARS Nationals in Lincoln, Neb. this July.

The AAU and USARS had previously partnered to add the derby to the Junior Olympics, with the AAU and granting authority to USARS to oversee proceedings. Having the JRDA on board will now allow everyone to put on the best possible showcase for junior skating talent.

“USARS is committed to growing all roller sports and we recognize the amazing job that the JRDA has done at the junior level,” said Fernando Regueiro, Chairman of the USARS Roller Derby Sport Committee and USARS Board of Directors member. “The JRDA has the expertise and the organizational skills to help us put together a world-class event. We hope to continue creating opportunities for athletes to participate in youth events affiliated to the Olympic Movement and the world of sports.”

In a statement posted to its website, the JRDA says with having junior roller derby in the Junior Olympics, “we are taking a big step forward in the development of the sport.”

With the partnership, USARS is deferring the bulk of the organization of the event to the JRDA, who quickly confirmed that the competition will be played under the JRDA-amended WFTDA rule set.

The JRDA has also already set guidelines for team selection. To make the strongest possible squads, players from the nine JRDA regions will be combined to form five regional teams. Spots are also being reserved for select teams from Canada, Australia, and the rest of the world. The JRDA has already selected coaches for the domestic teams, who will spend the next four months scouting players to fill 20-skater charters for each of them.

Players interested in becoming a Junior Olympian will need to fill out a recruitment form to alert the coaching staff. In lieu of tryouts, coaches will make their way to events that a signed-up skater would normally participate in to evaluate their skill. Team selections will be completed by May 1.

Come July, the best junior skaters in the country, and the world, will converge in Nebraska for what looks like will be three major roller derby events in one mega week: The 2016 JRDA Championships from July 9-11, the AAU Junior Olympics competition on July 12 and 13, and the 2016 USARS Roller Derby Nationals to cap things off, which could also include junior games.1