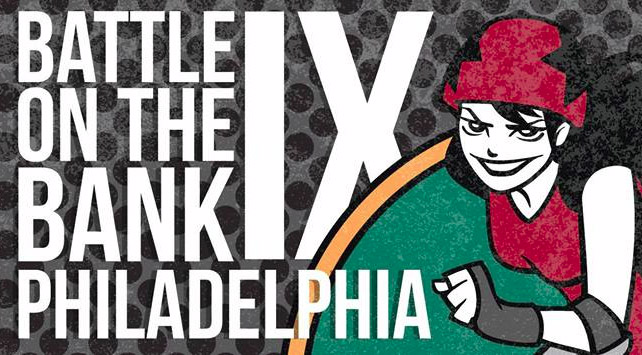 This weekend in Philadelphia, Penn., Penn Jersey Roller Derby and the Roller Derby Coalition of Leagues will present Battle on the Bank IX, banked track roller derby’s biggest tournament of the year. Eight teams from literally all corners of the United States will play over three days to determine a champ.

Battle on the Bank is always exciting for everyone in the RDCL, but this year they are extra-excited. This will mark the first time the tournament has taken place east of the Mississippi river, and is also the first time that two east coast teams will be participating. That’s a big deal.

The L.A. Derby Dolls are also a big deal, having won five of eight BotB championships including the last four in a row. They once again come into the weekend as the favorite, though their traditional southwestern rivals will have something to say about that.

Along with the eight adult teams, three junior RDCL teams will contest a junior’s title. And after an absence last year, the men are back on the banked track with a full-length exhibition game on Friday night.

Thanks to the hard work of Penn Jersey, it looks like most if not all of the games will be streamed live and free. For the stream location and latest details, check out the BotBIX Facebook event page, here. You can also follow on Twitter and Instagram @derbynotes for live updates all weekend.

The tournament is double-elimination featuring 30-minute games on the first two days, leading into the final placement games  on Sunday. The bracket and schedule is below. 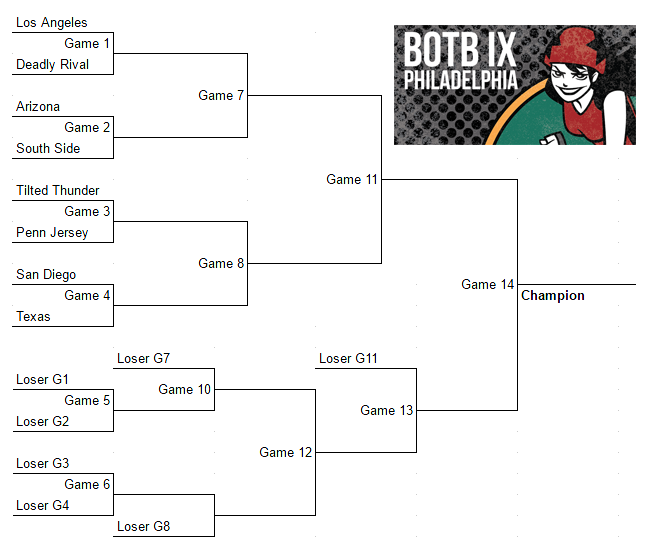 Battle on the Bank IX Schedule
All Times Eastern

Yup, the L.A. Ri-Ettes are the favorites once again. Their dominance in the banked track world is something you’ve been able to set your watch to over the last five years, so much so that I literally copied and pasted the first bit of this paragraph from last year’s Battle on the Bank preview.

As it has been the last few years, the only question is how competitive the best of the rest are in comparison to L.A., and if there’s any whiff of a hope at an upset that would topple them.

Well, maybe a whiff this year, yes. Last month the Ri-Ettes had their annual interleague game against San Diego in San Diego, and to pull a cliche out of the bag, the final score was somewhat deceptive. 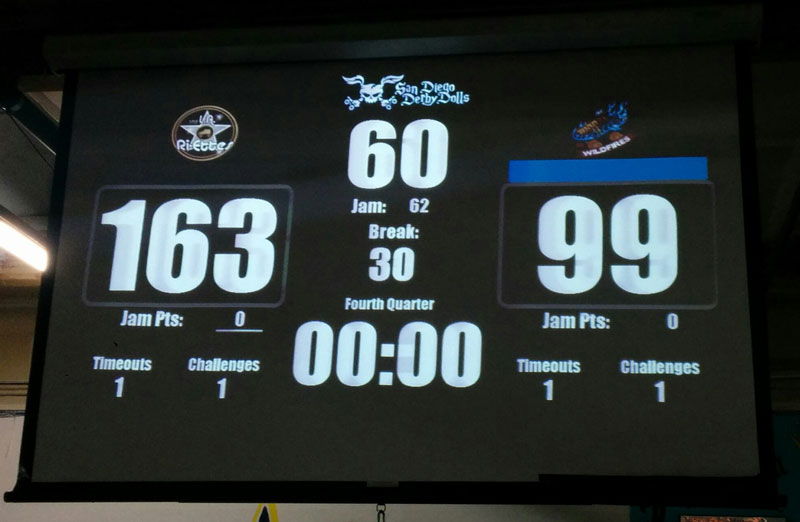 L.A. won comfortably, but nowhere near as comfortably as their 261-67 win over San Diego at Battle in the Bank VIII in Seattle last year. In attending this game, we noticed that San Diego was actually not that far away from L.A. in terms of skating skill or potential player ability.

It’s still the Ri-Ettes’ tournament to lose, though. However, this year should provide them with the stiffest final opponent they’ve had to face in a while.

We’re grouping these teams together in our preview for two reasons. Here’s the first one, from a game played in Arizona at the end of February:

The second reason is this one, from a game in San Diego six weeks later:

Arizona has consistently been the second- or third-best team in the RDCL, but got bumped off the podium last year after one of the tightest and closest Battle on the Bank games in history against then-hosts Tilted Thunder. (Seriously, it was amazing. Watch it here.) Though the Hotshots placed fourth, they were deserving of a top three placing.

San Diego has not been consistent. They’ve gone from double Battle on the Bank winner six years ago. to as low as 5th place two years ago, filling in the lower steps of the rostrum along the way. The Wildfires are on a definite upswing at the moment, looking as good against L.A. as they ever have been in some time.

However,  both of these teams have weaknesses. Arizona has traditionally been a bit on the lazy and sloppy side in giving up penalties, particularly jammer penalties leading to costly power jams. San Diego, while strong on their skates, has recently appeared to be stuck in flat-track strategy mode, letting the opposing blockers take control of the front of the pack. This often squanders good scoring chances and leaves a lot of potential points on the table over the course of a game.

This year it’s looking like one of the two will be the one to take on L.A. in the final. For that to be the case, they’ll likely have to meet in the 60-minute loser’s bracket final. If this year’s earlier results are any indication, it may be the best game of the tournament, especially if both can correct their issues and play to the best of their abilities.

The Railbirds used home court advantage at Battle on the Bank VIII to finish in the top three at the event for the second time in a row, despite not having much practice time on their track last year due to relocation difficulties. That’s a testament to the long road Tilted Thunder took to become one of the better banked track teams out there.

It really was a long road. Here’s how the team placed at all of the BotBs it has entered, starting with its first in 2010:

Since 2014, Tilted Thunder has demonstrated that it was neck-and-neck with the likes of Arizona and San Diego as a perennial top-three contender at the national tournament. It happened that all three teams played each other in a round robin in San Diego, the same event where SD beat AZ 167-135.

Surely, Tilted Thunder would be able to match wits with the both of them!

Oh, well…uh. Hmm. Those results don’t look good. (At least they confirm that San Diego and Arizona are pretty equal opponents!) We weren’t able to make it down for this event, so we don’t have a clear reason why Tilted Thunder wasn’t playing at the same level they were last year.

You can make the case that San Diego is a lot better than they have been, but Arizona’s team is largely the same as it was last year when Tilted Thunder beat them in 30 minutes and both games ended with similar margins. We’ll see if this was a one-time issue or the start of a trend this weekend.

South Side Roller Derby of Houston, and this year’s host league Penn Jersey Roller Derby, have some history.

Last year in Seattle, many expected that Penn Jersey would earn their first Battle on the Bank victory. That didn’t happen after they were sent home by South Side in their loser’s bracket game, and PJRD finished in joint-last with an 0-2 record.

The She Devils learned from that loss a lot. Earlier this year in San Diego they played in the Spring Fling interleague mixer, an event that also included one South Side Roller Derby. The final score of that 30-minute game was 83-37, with Penn Jersey getting the revenge win.

Penn Jersey will be greatly advantaged by playing on their home track, though likely won’t see Houston again since they are on opposite sides of the bracket. But don’t discount South Side, who went 2-1 at Spring Fling and are coming into BotBIX with their highest-ever seeding.1Though to be fair, this is mostly due to last year’s 5th place team, OC Roller Derby, losing their banked track and dropping out of the RDCL, slotting everyone that finished behind them up a seed.

Ah, the Lonestar Rollergirls. TXRD is the original modern roller derby league, though ironically it has remained more “original” than “modern.” Remember the penalty wheel? TXRD still has one, and they use it quite liberally during their home team events. Pillow fights, Tug-of-War, long jumping contests, “fights.” They still do ’em, and their fans still love ’em.

However, all of that stuff is kept mostly separate from the roller derby they play between the whistles, which is as legitimate as any other form of the game out there. That the All-Scar Army is here at Battle on the Bank, and indeed has been here for all but two years of the event’s history, says more than enough about their dedication to the game, sans the kitsch.

But being around as long as they have, things are bound to change. TXRD has a lot of new faces on the roster this year, and one very notable name left off of it. Rocky Casbah, who’s been around Texas Roller Derby since…God, who knows how long she’s been around? She won’t be playing this weekend, but players like her have come to define the TXRD legacy and its very unique place in roller derby today.

Early last year, Deadly Rival didn’t even have a banked track. Now they’re jumping in feet-first for their first Battle on the Bank tournament, coming up from the Tampa, Fla. area.

This isn’t their first RDCL tournament, however. They too were at Spring Fling and broke their interleague virginity against the two teams seeded above them. The results of the games went pretty much like everyone expected, with South Side beating them 161-18 and Penn Jersey winning 174-21. Unless Arizona is the victim of a shocking upset, it’s looking like South Side will face DRRD again early in the loser’s bracket to knock them out of the weekend’s proceedings.

Expect Deadly Rival to do what most teams would do in their situation: Play some roller derby, learn some stuff, and have fun out there.

We’re in for a treat on Friday night, with the boys returning to Battle on the Bank for a full-length featured bout between Penn Jersey’s men’s team, The Hooligans, and a mashup team of top area skaters called the Bank Track Bullies.

The last time there was a men’s game at BotB was two years ago in San Diego, when two MRDA teams, the SD Aftershocks and the Arizona Rattleskates played a full-length game that was cut short after just three quarters due to literally everyone fouling out.

There are higher hopes for the guys this year. The Hooligans know the banked track as well as any other (women’s) banked track league, having originally been one back in their MADE days. The Bullies are packing some serious talent, including a few USA Roller Derby players like Chuck Hendrick.

Banked tracks teams are few and far between, and men playing games on them are very rare occurrences. This is a game that probably shouldn’t be missed for that reason alone.

The three fully-rostered juniors programs of the RDCL are also here in Philadelphia, and will play three round-robin games on Saturday with the best two teams advancing to the full-length championship game on Sunday. The San Diego Dollinquents are the favorites, though the Arizona Derby Brats and Tilted Thunder Peeps will want to be sure they are in the final along with them.

The kids these days have extra motivation to perform well this weekend. Like their adult counterparts, the RDCL features a junior all-star team that takes the best players from all leagues. Earlier this year at the Jantastic Invitational in San Diego, the RDCL Jr. All-Stars played an all-star team from the JRDA. Skaters looking to get on the team next year will want to make an impression on Saturday on Sunday.