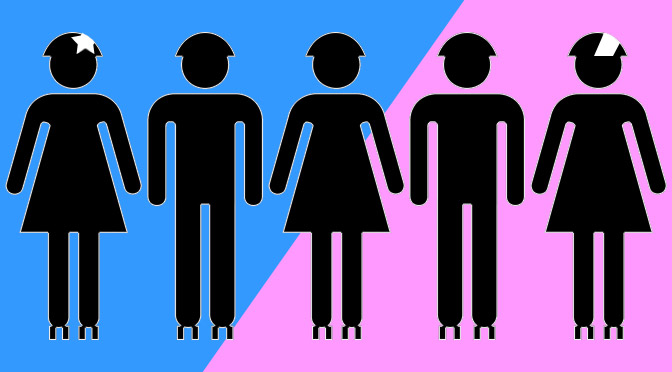 It started off with a query to the Internet. It ended with a wide-ranging discussion on how derby skaters feel about co-ed roller derby.

As more men enter the roller derby community and more leagues expand to include dude-derby programs, having males and females simultaneously practice, scrimmage, and bout together (and against each other) is something that seems to come up often, particularly from the perspective of the female skaters who might not be completely comfortable with such a setup.

Windy City Rollers bench coach and former Derby News Network principal Tracy Williams—Justice Feelgood Marshall to you and me—got curious about this very thing. He went to Facebook to solicit the public1The original Facebook post was Global, meaning anyone in the world can see it or comment on it. This also means every comment is public to the same world audience, allowing us to also share them here. opinions of derbyfolk about the topic, specifically asking female skaters if or why they choose to avoid XXY derby functions.

The discussion blew up, getting over 200 responses within just two days. Reading through them all offers a lot of different takes on co-ed roller derby, both the good and the bad. It’s well worth the time to read the full discussion, here.

Here are some of the highlights. Let’s start with someone that is all for it.

This opinion mirrors many of the ones that are cool with mixing the genders during gameplay. Women that enjoy the physical aspect of derby will certainly get a challenge against their male peers. Some in the thread showed concern about the general “sloppy” play that men as a class might exhibit, but most agreed that often has less to do with them being men than it does with their general skill level being low, as would with inexperienced women.

Even so, the negative experiences that some female skaters had with co-ed play previously has given them pause. Take this opinion of Grace Killy, former president of the WFTDA. 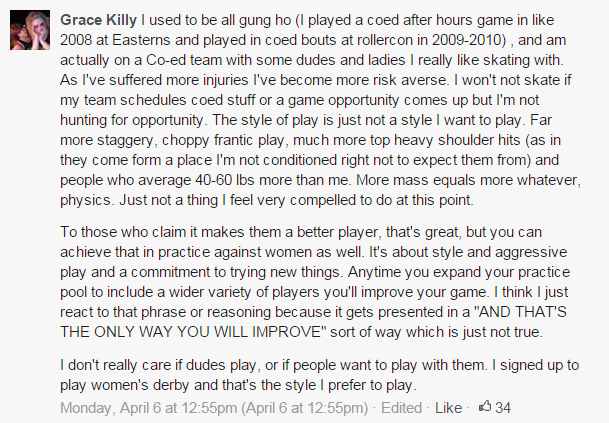 Her comment also addresses a fallacy used by those in favor of co-ed play, that being it will improve their overall skills in a way that playing exclusively against women can’t. While there may be a kernel of truth to that, Killy’s assessment of expanding your practice pool to improve your game is spot on; you don’t necessarily need to play against men to achieve your best.

The sheer number women playing roller derby, the the vast variety of styles and body types they bring to the table, is a good example of this. Windy City Rollers all-star jammer2…and Olympic long-track speed skating hopeful, let’s not forget. Sandrine Rangeon goes through the four different types of opponents she might come across, gauging them on how likely they are to, in her words, “hit me in the face.”

But as it is, there are two sides to the story—what about a male skater’s opinion on the matter?

Women skaters that feel that they can learn a lot from the guys may want to take heed of this advice. If big dudes—big agile dudes—went 110% against smaller women, that may lead to a lot of awkward contact. (To the face.) Conversely, if men were to hold back a little bit so as to make blocks more comfortable for themselves, their targets may not be getting a real test of their abilities.

Elsewhere in the thread, perspectives from entirely different angles started showing up. This one makes the case that those taking issue with co-ed derby may actually only have an issue with co-ed WFTDA derby, seeing as other forms of the game may be better-designed to handle multi-gender gameplay.

This comment mentioned USARS roller derby, and a few others chimed in with their experiences playing by MADE rules. Both these derby disciplines have a single universal ruleset for both men and women, special designations or conventions specifically for co-ed play3For example, MADE has a general guideline that any co-ed jam may have no more than two male players per team, and that only one of them can be a position player (jammer or pivot, but not both)., and even a co-ed division for their championship tournaments.

They also don’t have the same level of slobberknocker-wallbusting and the sometimes-dangerous aspect of players skating into one another from opposite directions, two events where the smaller body—usually the woman in a male/female collision—comes out worse for it. As the comment noted, this doesn’t necessarily mean those that don’t like co-ed WFTDA derby will like co-ed USARS or MADE derby, but there are aspects of it that might be a better fit for those on the fence.

Then again, there are some female skaters that won’t engage in any co-ed derby, for any reason.

As you may have heard, roller derby has started making its way through the Middle East, starting with Egypt and now into the Persian Gulf states. This new expansion brings with it new realities. Different parts of the world have different beliefs when it comes to the roles of females in society. These include females playing sports against each other—and against men.

This was an unexpected perspective, as was this next one. A consistent theme among those against playing co-ed comes in an unfortunate form. Many skaters reflected on past personal experiences with abuse or domestic violence. This understandably makes them very uncomfortable banging heads with men, in any context.

These kinds of comments popped up a little too frequently for comfort. They are a sobering reminder that today’s society does not always treat women as equals.

On the other hand, they can also serve to highlight one of the most amazing aspects of modern roller derby. Those that may have had troubled pasts have found new lives in derby, giving them an opportunity to express themselves in a supporting, like-minded environment. This self-empowerment has created something amazing for women, from small-town rec leagues all the way up to a global organization for them, by them.

Over the last few years, some have displayed an undercurrent of animosity toward men getting into roller derby, something that has been subsiding as the guys continue to prove themselves an equal part of the community. The discussion on co-ed derby has also evolved, and this one in particular is showing how much the conversation has advanced.

But as it is with roller derby—and how it always should be—there are options for skaters.

Are you a lady that wants to play co-ed derby? Great! You should have no problem dropping in on a men’s practice or getting into a mixed scrimmage or challenge at RollerCon. Don’t want to play co-ed derby? Cool! You’ll always have your home league and a multitude of opponents to challenge yourself against your peers. Want to try co-ed in a different ruleset? Awesome! Your options are expanding—soon enough you’ll be able to sample MADE, USARS, or maybe even banked track play during your derby travels.

Given how roller derby has historically been all about giving men and women equal billing on the track (albeit not in the mixed-gender fashion) there is an additional option for co-ed play that the community might do well to explore sometime down the line.

One of my absolute favorite aspects of classic roller derby is how men and women can be on the same team without actually competing against one another directly. Ignoring the culture of the time or the physical differences between genders, the idea that girls can play by the same rules as guys in the same game, and have their work carry equal importance towards the final result as what the men do, is a dream scenario for feminists.

Those that are all for men and women sharing the track as equals, but are against the potential physical maladies, might do well to play roller derby in the old-school style where periods alternate between of men’s and women’s play and the combined score of each results in a team’s total score. Roller derby naturally supports a structure of multiple periods, and there’s no reason it couldn’t work in the modern game.4Historically, roller derby games were 8 periods of 10-12 minutes each, giving 4 skating periods to each sex. For the modern 60-minute game, you could break that down into 6 periods of 10 minutes, or 3 periods each. To account for the shorter bursts of action and longer rest periods, rosters can be cut to 8 men and 8 women on a team. Half the work means twice the intensity. I’d pay to see that. (Because it would be really f’ing cool.) It’s many of the benefits of playing with men, with none of the negatives.

That’s my opinion on men and women playing together. What are your thoughts on the pros and cons of co-ed roller derby? Feel free to leave a comment below.